2020 data on Afghan opium poppy cultivation baselines results of drug control efforts during the past 19 years. After the Taliban has just become before the Taliban.

Researchers and business analysts have studied Afghan opium poppy cultivation for several decades. But they mostly stayed in the academic domain.  Use of Lanchester analytic techniques focuses on providing ACTIONABLE results.

Alexei Kuvshinnikov (Austria) is an expert in the use of structured analytical techniques for strategic threat assessment and foreign policy analysis.

During the past decade, he worked as Resident Advisor and short-term expert on EC-funded drug control projects in Latin America.

This post update includes the analysis of 2020 data on Afghan opium poppy cultivation.

All data used in this post are from Afghanistan Opium Surveys compiled and published annually by the UN Office on Drugs and Crime (UNODC) since 1994. It is open-source data.

While the method of its compilation rests on a number of assumptions and extrapolations, the extent to which it is accurate is open to debate. But what principally matters for my purposes is that UNODC data is historically consistent. And thus, comparable year-on-year since the dawn of times. Which in this case is 2002.

I suppose the fact that it is universally accepted as the most authoritative source of data on the subject at hand also adds to the probity of my analysis.

Afghan opium poppy cultivation is one of international problems that have defied solution for decades.

This conundrum has a baffling complexity. Despite the best efforts of scores of wise men, dynamics of this problem retain for us (Westerners) a high degree of opacity.

In the medium term, these have been cancelled out a few times over by grave setbacks, as was the case in 2014. Counting in the 2017 fiasco and subsequent market evolution during 2018-2020, in the long-term perspective things have only gotten worse.

The sudden spike in opium poppy cultivation area recorded in 2017 has been reverberating ever since. It accelerated market evolution and led to some terraforming shifts in the market landscape at provincial, regional and national level. To discover them, I used the New Lanchester Strategy of Sales Battles and Market Combat. And in a nutshell, this is what I found.

The Southern region thus keeps a stable and firm controlling grip over the national market.

Southern region – In 2018, this market completed its decade-long evolution towards a Type 1 market, a monopoly where the top-ranked actor has the market share exceeding 73,87% .

During 2009-2016 it represented an upper-range Premium market (Type 2) controlled by Hilmand province.

In 2017, a transition to Monopoly market (Type 1) began with Hilmand province coming only 0,85% short of the threshold.

In 2019, when the drought was succeeded by strong floods, Hilmand province again came on top of its competitors expanding its market share to an unprecedented 77,73%.

And in 2020, with a market share of 76,78% it kept opium poppy cultivation in the Southern region firmly in check.

This position translated also in Hilmand province having on its own a controlling influence (51,68% in 2020) over the NATIONAL Afghan opium poppy cultivation market.

Hilmand province – In 2020, Nad Ali+Naher-i-Saraj+Nowzad districts had control (49,77%) of the provincial market.

Most recently, Nad Ali ranked at the top for eight consecutive years. Naher-i-Saraj was the runner-up until 2018 when it was overtaken by Nowzad district but in 2019 won the second position back.

Musa Qala and Kajaki districts have alternated in the fourth position in seven of the last nine years.
Opium poppy cultivation areas in the four top-ranking districts in the Hilmand province are all within 1.40-1.01 range. It creates a dynamic Polyopoly market (Type 5) that remains stable through cooperation rather than competition between actors.

2: STATEMENT OF THE PROBLEM

In 2017, Afghan opium poppy cultivation jumped – unexpectedly to most, if not all – to the all-time high of 328,298 hectares. No one had seen it coming.

The next year, in 2018, despite shrinking by some 20.01% due to a historic drought, it still clocked at some 236,598 hectares the second-highest cultivation area ever.

In 2019, the drought gave way to high seasonal floods that pushed the opium poppy cultivation area further down, to some 163,144 hectares, which was the smallest since 2012. All´s well that ends well? If only… 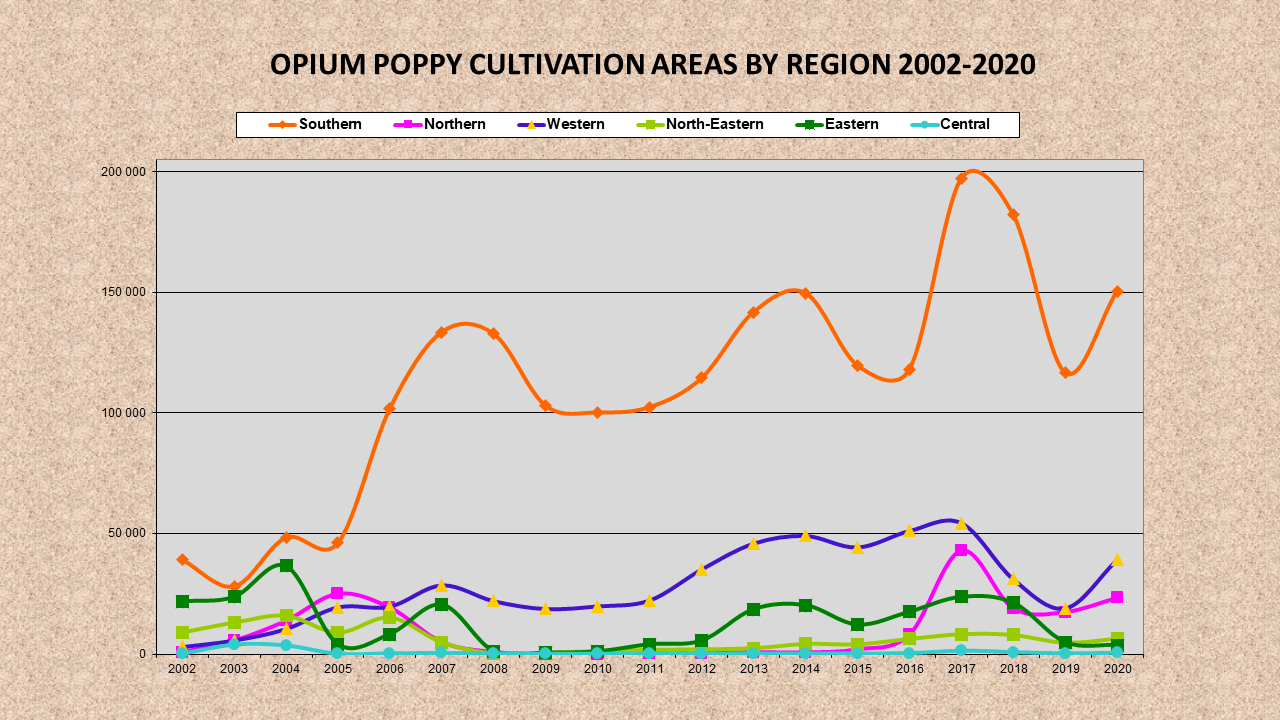 The farm-gate value of opium production in 2020 was estimated at US$ 350 (300 – 400) million. It was at its lowest level since 2009, due to opium prices being at their lowest level since beginning of the systematic monitoring by UNODC.

Nevertheless, the global monetary value generated by the Afghan opiate trade is roughly equivalent to the US defense budget.

True, revenues obtained from sales of opium sustain hundreds of thousands of Afghan farmers, opium collectors and their families.

But opium moneys also fund militants, insurgents and terrorists that every year kill and maim tens of thousands people in a score of countries.

They also fund all types of crime linked to drug trafficking – from globally operating organised crime groups to local gangs, as well as to the laundering of criminal proceeds.

During the past 30 years or so, hundreds of millions of dollars have been spent annually in bi- and multilateral cooperation programmes that aimed to stabilise and hopefully shrink opium poppy cultivation.

The record increase in the area under opium poppy cultivation observed in 2017 caught everybody by surprise. It was a perfect “black swan” event. A classic.

Hopefully, it has cast some serious doubts on discursive analytic methods used for assessing past strategy effectiveness and making predictions for the future that underpin funds allocation.

They belong to the subdomain of econometric methods and originate in Lanchester models of warfare and Lanchester market share strategy.

Despite a long record of amazing successes, the heritage of Frederick Lanchester remains little-known. That is, except in Japan. There, the New Lanchester Strategy of Sales Battles and Market Combat has achieved a cult following.

And why specifically Lanchester analytic techniques?

At the age of 28, he built England’s first gasoline-powered automobile. At 31, he founded the Lanchester Car Company. Its innovations include disc brakes, power steering, four-wheel drive, and fuel injection.

After the outbreak of World War I, Lanchester became engrossed in the subject of air warfare. He focused on formulating the rules of its effectiveness. By doing some quantitative studies, he arrived at the Lanchester laws of combat. His findings were recorded in “Aircraft in Warfare: The Dawn of the Fourth Arm”. Lanchester published it in 1916.

At some time after Pearl Harbour, US military researchers stumbled upon Lanchester concepts. As a consequence, the US military applied Lanchester laws with overwhelming success in the latter stages of World War II, particularly in the Central Pacific theatre.

After World War II, Morse and Kimball transferred Lanchester laws to operations research theory intended for use in business situations (“Methods of Operations Research“). In the 1950s, W. Edward Deming introduced this concept into Japan. Here, Lanchester thinking took root like a weed.

During the subsequent decades it grew into a cornerstone of the Japanese business philosophy.

For well over half a century, Lanchester analytic techniques have been used to define sales strategies aimed at growing market share. It remains as valid as ever. Both inside Japan and out.

Applying these rules allows to distinguish between the following five market types (Taikobo Onoda). To grow market share, in different types of markets players will revert to different strategies. 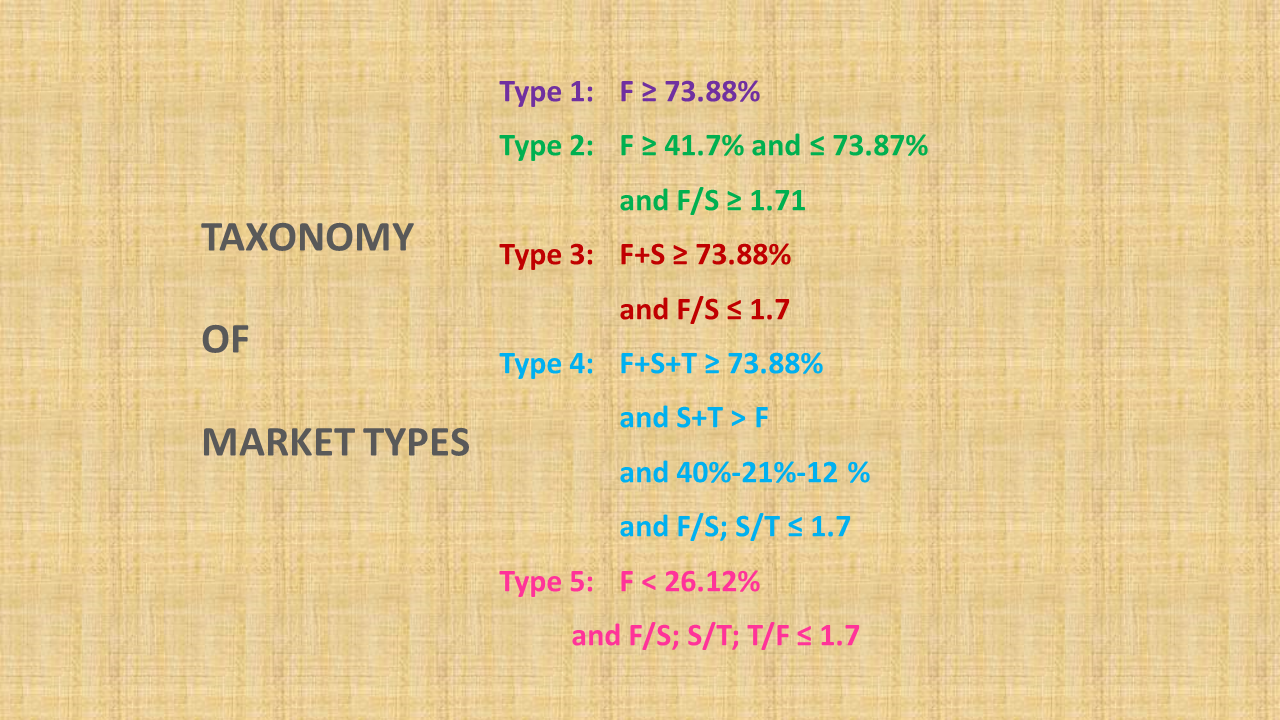 The above typology of markets arises from Koopman’s and Onoda’s equations and the reliance on the 3:1 law.

Of the many relationships developing during the years, none is more arcane than this 3:1 rule. It harkens back to the initial research by Lanchester. He asserted that in order to vanquish an enemy that had established a defensive position, the attacker must have three times as many troops.

In the same key, the figure of merit of 1.7 comes about as the square root of 3. In Lanchester strategy it defines the “shooting range”. To be within the shooting range infers being vulnerable to an attack from below.

When two market actors have together more than 73.88% of the market – a perfect dual oligopoly – the focus of competition moves to the concentrated competition between them. When their sales/marketing strategies are equally effective, the side with the largest sales force will win.

Second Lanchester Law – the Law of Effects of Concentration.

In markets where no actor has a clear leadership, the one with the highest market share will have an advantage.

The analysis of market share and market targets is paramount to the game of business. Market share provides the capital resources with which to defend a position or attempt to expand it.

In any given industry, profitability increases in a linear relation to growth in market share.

4: APPLYING THE METHOD TO THE PROBLEM 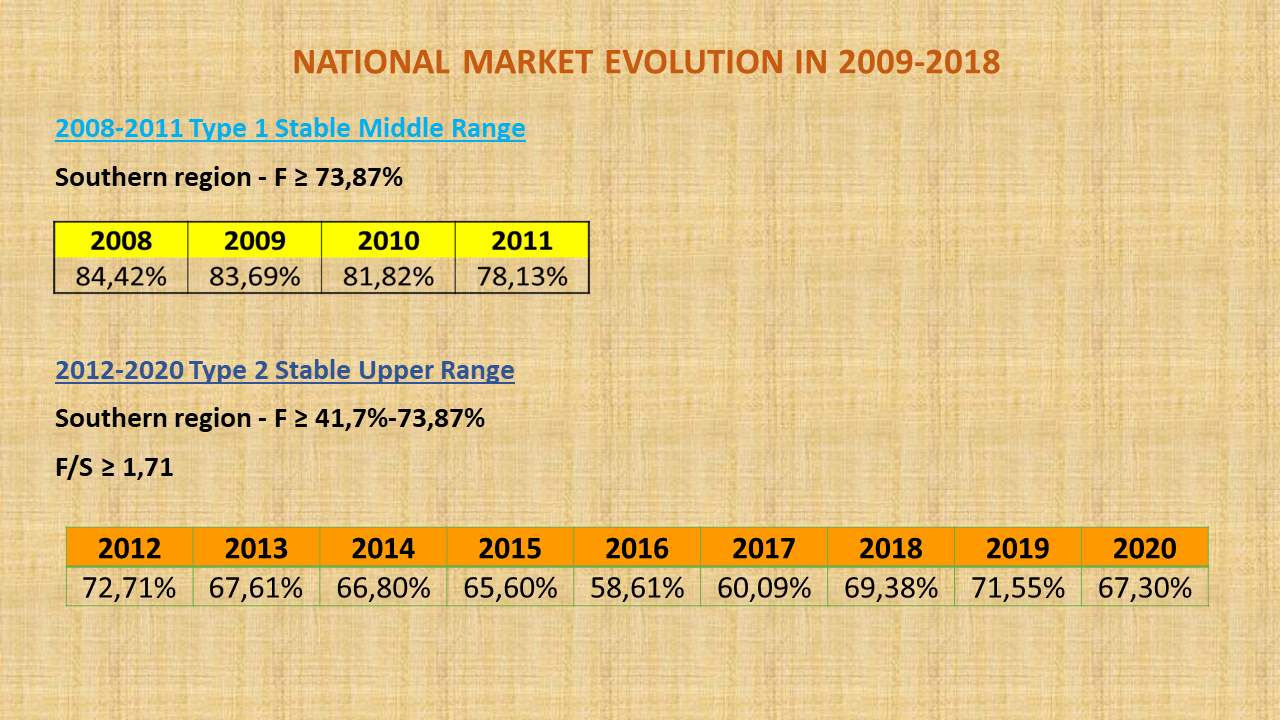 At the national level, Afghan opium poppy cultivation market appears to be in a stable state. 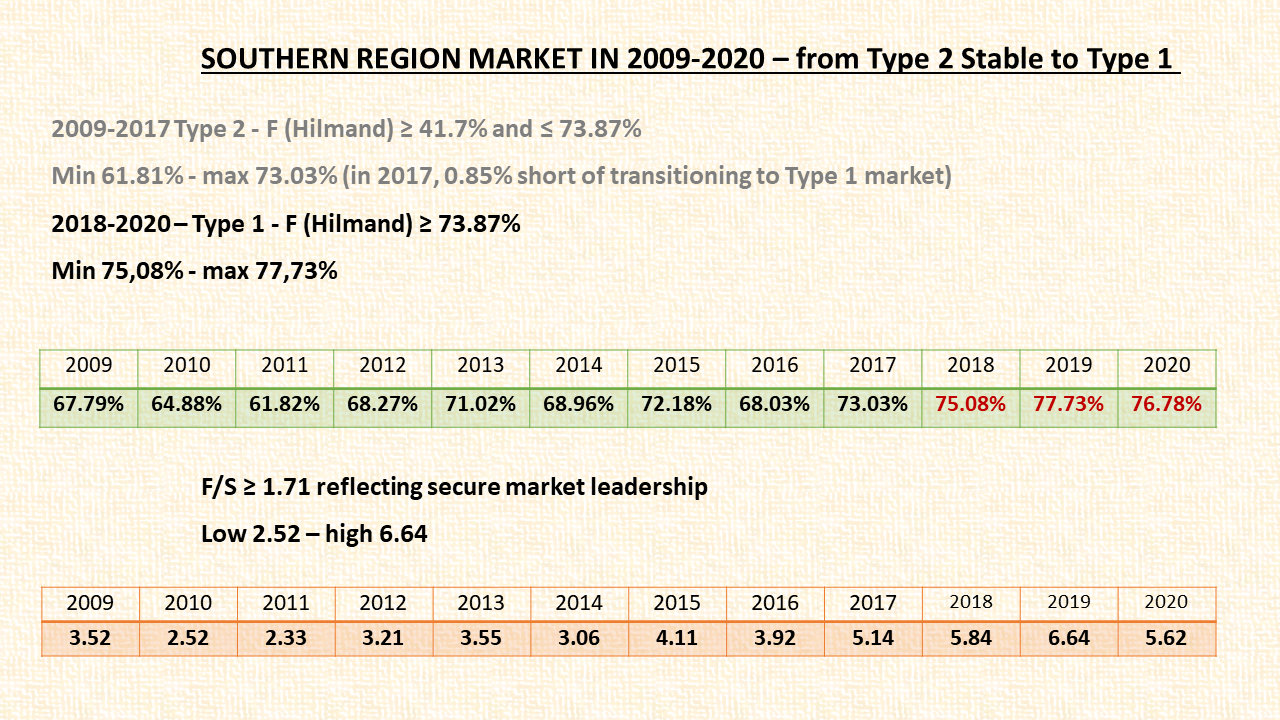 The dynamics of Southern region market are determined by its top-ranking actor, Hilmand province. Its evolution followed an opposite trend, as compared to the national market, starting as the Type 2 stable upper range market and evolving into the Type 1 one.

The trigger that propelled Hilmand province through the monopoly threshold was the unprecedented drought of 2018. The antifragility of Hilmand province was based on the use of irrigated land. As a result, it suffered only a smal reduction in cultivation area amounting to some 5.01% acquiring a monopoly control over this market with a share of 75.03%.

In 2019, when floods chased the drought leading to an even sharper dip in opium poppy cultivation, the key districts in Hilmand province were spared the worst of flooding. As a result, Hilmand province could expand its share of the regional market to an unprecedented 77,73%. 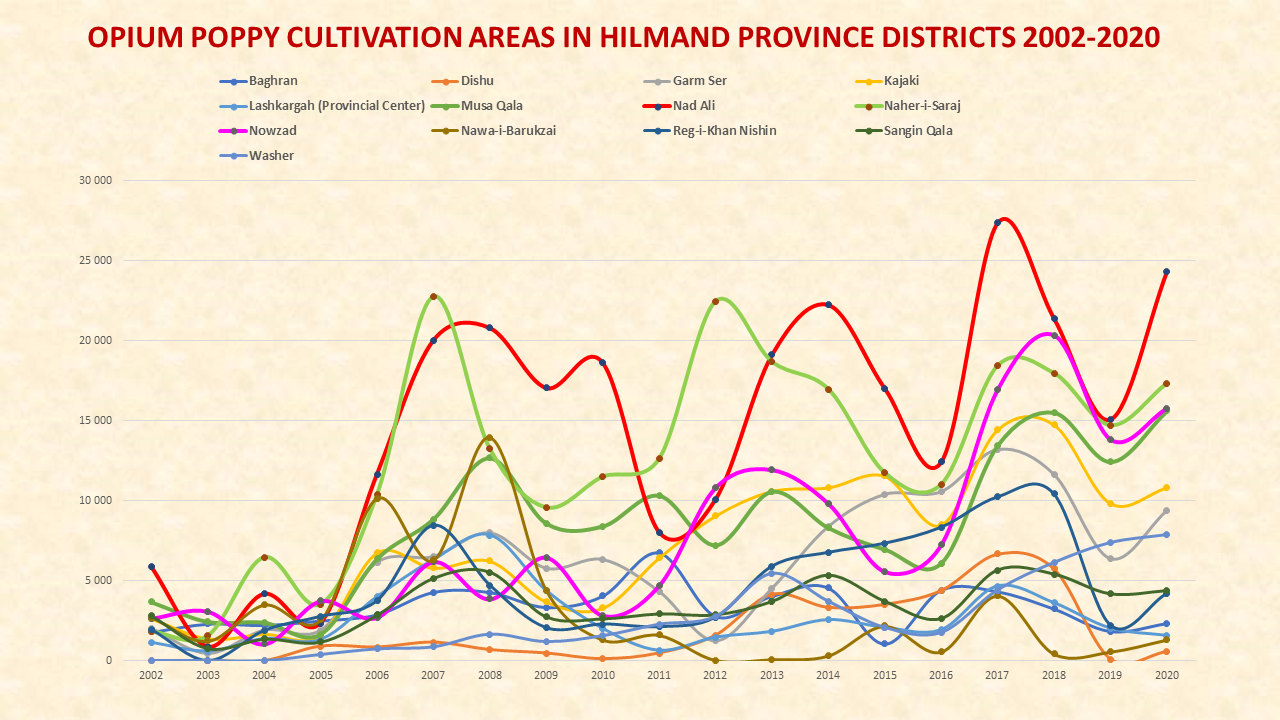 In 2018, in the generally shrinking market, Nowzad, Musa Qala and Kajaki districts performed exceptionally well increasing their respective market shares. It may be worth noting that the latter two districts belonged to original Taliban strongholds in Hilmand province.

The province market has historically been highly fluid and corresponds to the Polyopoly market (Type 5) . Its stability is based on cooperation rather than competition of actors.

This is illustrated by the uniquely stable performance of Nad Ali and Naher-i-Saraj districts that is a key characteristic of the Helmand province market. These two districts took the first and second positions respectively ten times out of nineteen since 2002, including in seven out of the last eight years. 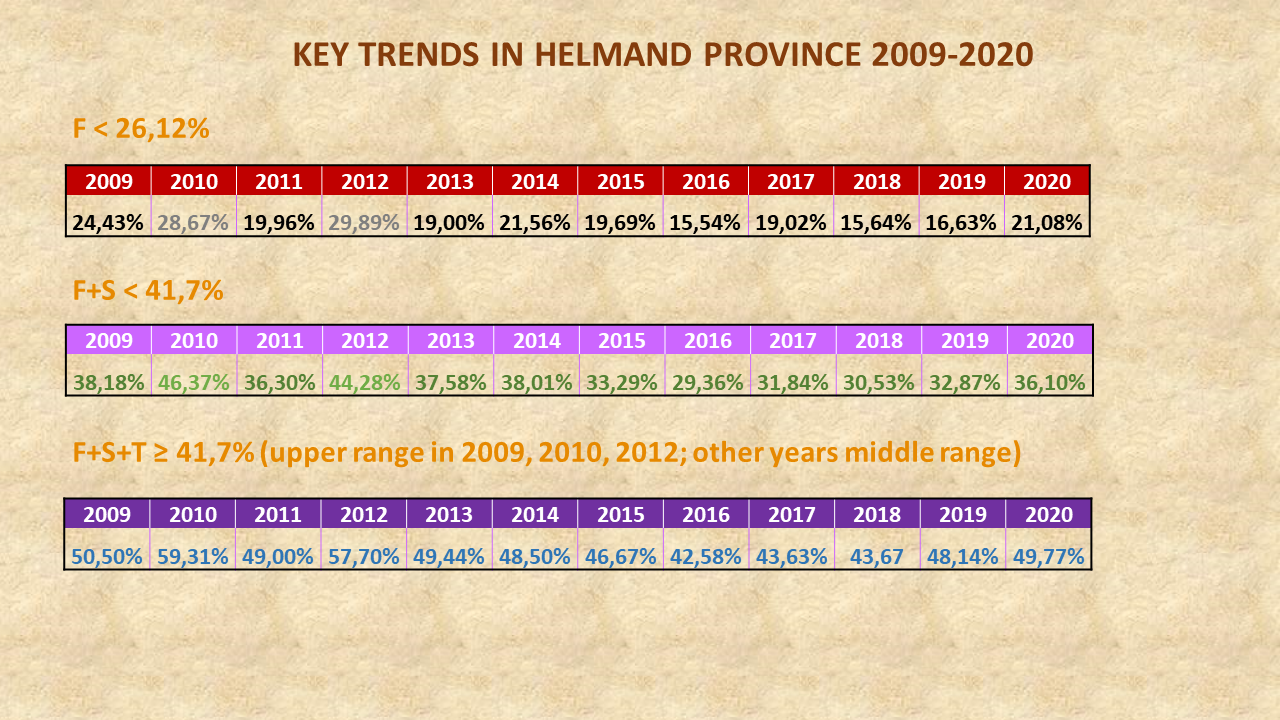 But on the other hand, the top three actors combined could surpass that mark during seveteen out of nineteen years since 2002, and with a margin to spare.

A district ending up in the third position became thus a kind of a kingmaker. Nowzad, Kajaki and Garm Ser districts rotated competing for this role. 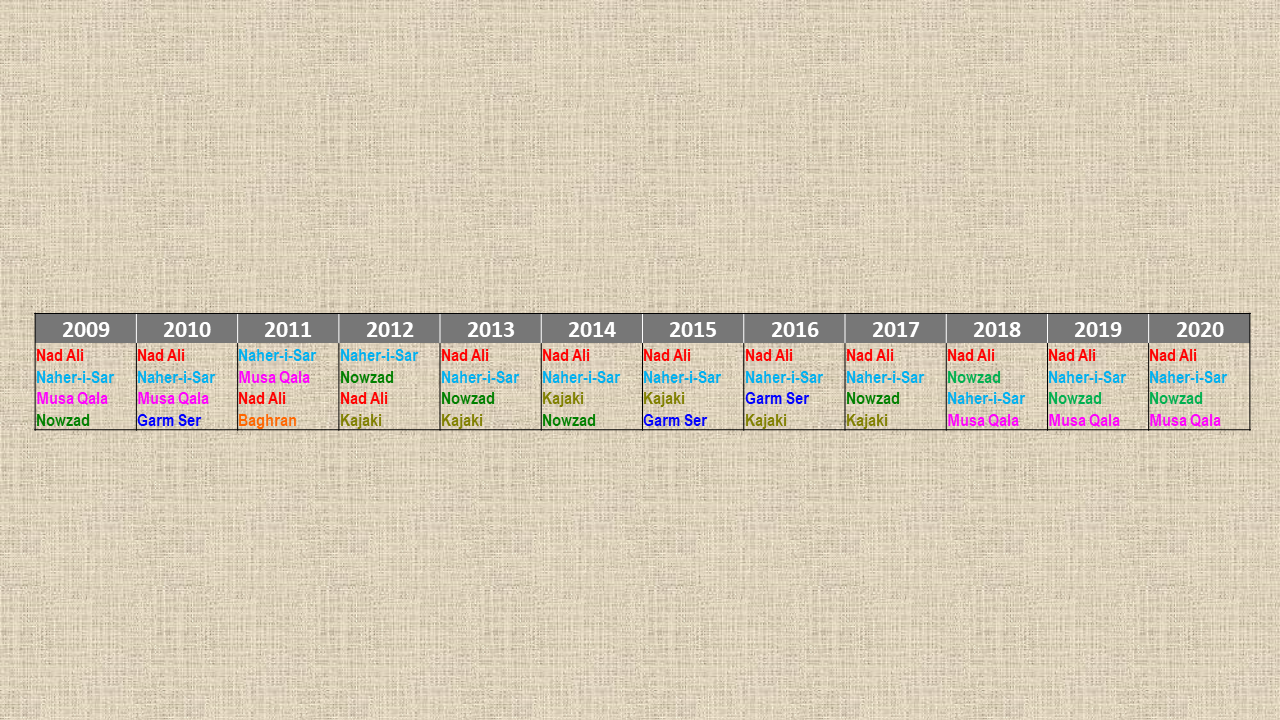 Being a rather extraordinary year, 2018 saw the ascent of the Nowzad district to the second position. It missed the opportunity to end Nad Ali district´s eight-year supreme reign by a meagre 0,76%. 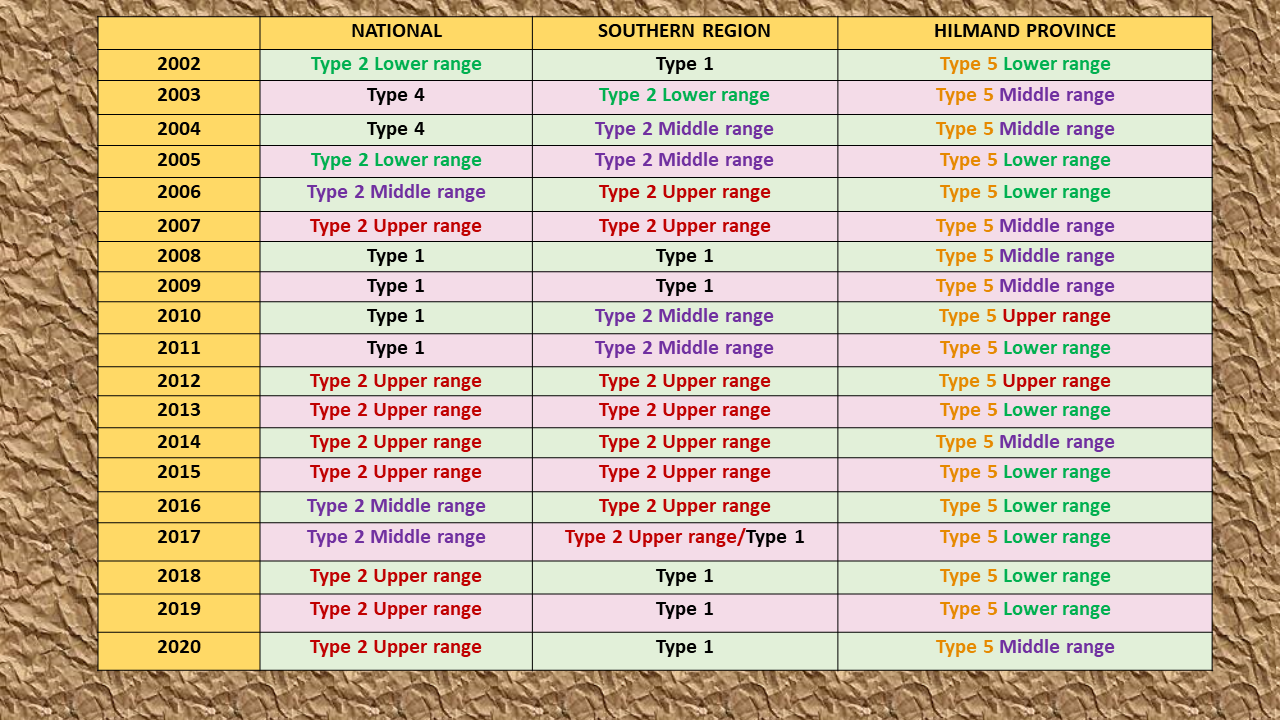 Historically, the stable Type 2 (Premium) market maintains a clearly observable prevalence at the national level and in the Southern region. It leads to market consolidation around the stable supremacy of the market leader.

This market type implies presence of one very strong actor that imposes stability. Since 2002, it was invariably the Southern region at the national level and Hilmand province at the regional level.

Stablity at the national and regional level is, essentially, rooted in the collaborative Polyopoly market (Type 5) that exists in the Hilmand province.

Here is then where the heart of the issue is. 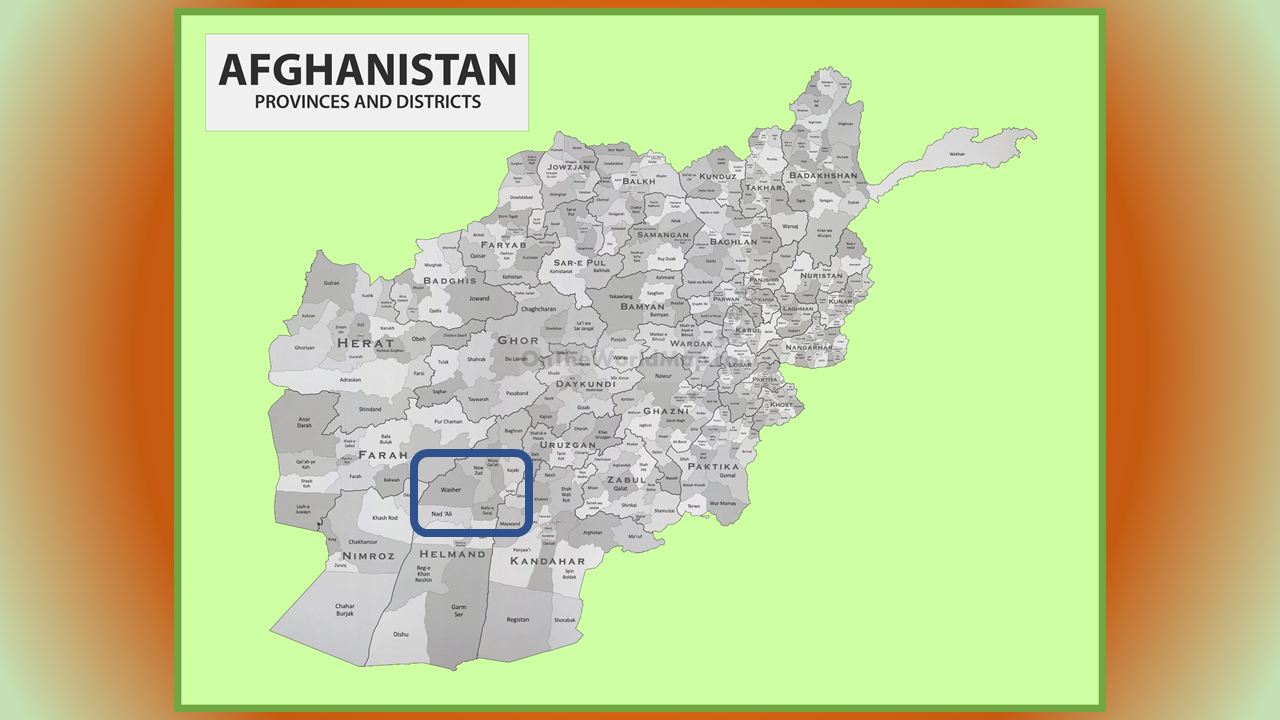 Or to be even more precise: 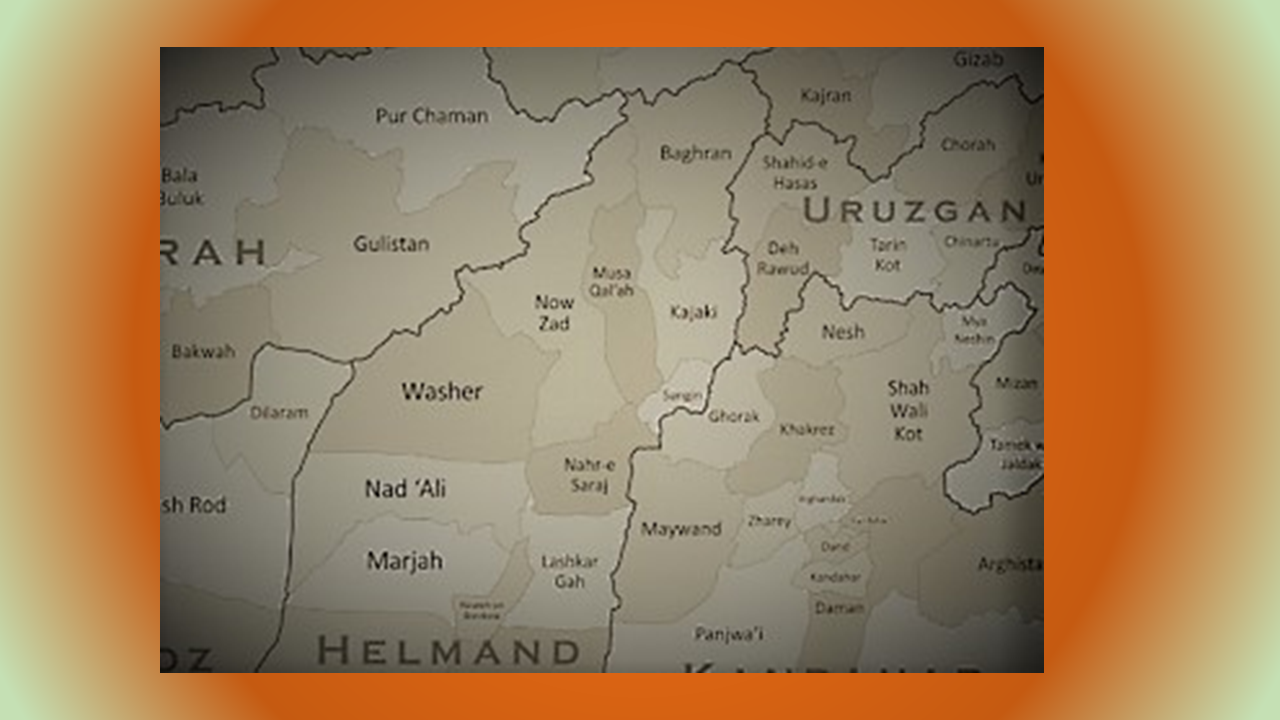 This market control configuration has proved to be antifragile and unassailable by climatic quirks , competitive forces or crop eradication measures.

If it can ever be disrupted, then possibly only by a fatwah issued by a supreme Muslim authority.

Or by a mutant killer fungus.

The present analysis looked at the market for opium poppy cultivation areas.

Arguably, it could be more useful for practical purposes to focus on the opium production market.

Thus, at the level of Afghanistan´s regions their shares in opium poppy cultivation areas represent an acceptable proxy for shares of the opium production.