Case Study 2: Afghan opium production is at a historic high. Gosh, what a surprise!

Afghan opium production has reached a historic high. Satisficing discoursive analytics failed to provide a warning about the unfolding of this scenario. This analytic fiasco calls for an application of a different set of analytic techniques.

Lanchester analytic techniques belong to the subdomain of econometric methods.

Despite a long record of amazing successes, the heritage of Lanchester  remains little-known. That is, except in Japan, where the New Lanchester Strategy of Sales Battles and Market Combat has achieved a cult status.

Afghan opium production is one of international problems that have defied solution for decades.

This conundrum has a baffling complexity. Despite best efforts of scores of wise men, dynamics of this problem retain for us (Westerners) a high degree of opacity.

Efforts to resolve the issue of Afghan opium production command great attention and draw in big-time funding. But only modest short-term reductions in the areas under opium poppy cultivation could be recorded so far.

In the medium term, these have been canceled out a few times over by grave setbacks, as was the case in 2014.

Counting in the 2017 fiasco, in the long-term perspective things have only gotten worse.

Discursive analytics are of little practical help when attempting to explain such phenomena. Instead, let’s turn to some of Lanchester analytic techniques.

Because 1) they have not been applied before to the study of this phenomenon.

And 2) because those other techniques that have, have failed in helping us figure out what’s going on.

The data I use I extracted from Opium Poppy Surveys compiled and published annually by the UN Office on Drugs and Crime (UNODC). This is open source data.

The extent to which it is accurate can be debated. The method of its compilation rests on a number of assumptions and extrapolations that may be questioned. However, for my purposes that is beyond the point.

The main thing that matters for me is that this data is internally consistent. And comparable year-on-year since the start of times, which in my case is 2002.

1: STATEMENT OF THE PROBLEM

In 2017, over 90% of the world’s opium poppy cultivation areas were located in Afghanistan. During the past two decades, its share fluctuated a bit but never dipped below 75%. That is a very conservative estimate. In all probability , it was probably closer to 85% at the low end.

It means it reached a new ALL-TIME HIGH.

Since more than two decades, opium poppy cultivation was centred in Afghanistan’s Southern region (55-85%). And within that region, in Hilmand province. 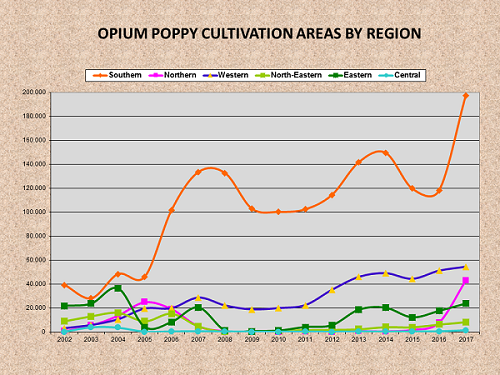 Farm-gate value of the 2017 opium output is estimated at USD 1.5 billion.

Revenues obtained from sales of opium (2000 tons in 2017) sustain hundreds of thousands of Afghani farmers, opium collectors and their families. Opium moneys also fund militants, insurgencies and terrorism that every year kill and maim tens of thousands of people in a score of countries.

Revenues obtained from trafficking and sales of heroin (448 tons produced in 2017, USD 60 billion at street price) fund international criminal organizations (and terrorists) on a major scale.

Heroin addiction (17.7 million people in 2015) generates a massive volume of street crime and is a major channel for the spreading of AIDS.

During the past 30 years or so, hundreds of millions of dollars have been spent annually in bi- and multilateral cooperation programmes aimed at stabilising and hopefully shrinking opium poppy cultivation.

The unexpected and unforecast record growth in the area under opium poppy cultivation observed in 2017 was a “black swan”, a tsunami rising from calm waters. A perfect fat-tail event. A classic.

Hopefully, it will have a devastating impact on credibility of analytic methods used in the past and assessments of effectiveness of strategies based on theose. The 2017 opium cornucopia means that the cumulative international investment of at least USD 15 billion to prevent it had – in the long term – brought little meaningful result.

One can argue, of course, that if it were not for these 15 billion, things would have gotten much worse much faster. I am not inclined to buy this argument. After 2017, things don’t need to get much worse to become the worst-case scenario.

And things will get worse if no adjustments to control strategies are made.  The first step towards making adjustments to strategies involves conducting analysis. A different kind of analysis. Analysis aimed at getting some clues about who make the opim poppy cultivation market tick.

From today’s perspective, I’d say the next jump in cultivation area is scheduled for 2020. Or 2021, at the latest. Makes sense to make good use of the time that’s left until then. And don’t tell me you haven’t been warned.

At the age of 28, he built England’s first gasoline-powered automobile. At 31, he founded the Lanchester Car Company. It proved responsible for such inventions in the automobile industry as disc brakes, power steering, four wheel drive, and fuel injection.

After the outbreak of World War I, Lanchester became engrossed in the subject of air warfare. He focused on formulating the rules of its effectiveness. By doing some quantitative studies, he arrived at the Lanchester laws of combat. His findings are recorded in “Aircraft in Warfare: the Dawn of the Fourth Arm ”. Lanchester published it in 1916.

Lanchester’s resulting suggestions were adopted to the effect that the British Royal Air Force and the Air Ministry were established.

At some time after Pearl Harbour, US military researchers picked Lanchester theory up. Lanchester laws were applied with overwhelming success in the latter stages of World War II, including in operations in the Central Pacific.

After World War II, Morse and Kimball transferred Lanchester laws to operations research theory intended for use in business situations (“Methods of Operations Research“). In the 1950s, W. Edward Deming introduced this concept into Japan. Here, Lanchester thinking took root like a weed.

During the subsequent decades it grew into a cornerstone of the Japanese business philosophy.

For now well over half a century, Lanchester analytic techniques have been used to define sales strategies aimed at growing market share. It remains as valid as ever, both inside Japan and out.

Applying these rules allows to distinguish between the following five market types (Taikobo Onoda). To grow market share, in different types of markets players will revert to different strategies. 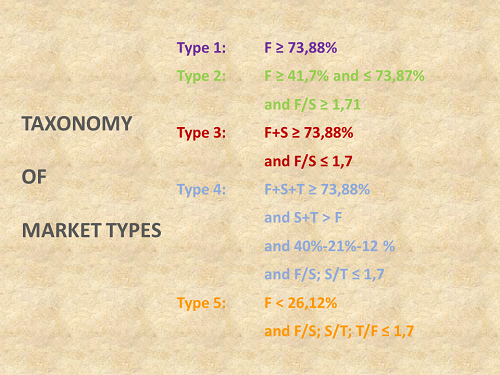 The above typology of markets arises from Koopman’s and Onoda’s equations and the reliance on the 3:1 law.

Of the many relationships that have been developed during the years, none is more arcane than this 3:1 rule. It harkens back to the initial research by Lanchester. He asserted that that in order to vanquish an enemy that has established a defensive position, the attacker must have three times as many troops.

In the same key, the figure of merit of 1.7 comes about as it is the square root of 3. In Lanchester strategy it defines the “shooting range” or “hitting range”.

When two market actors have together more than 73.88% of the market – a perfect dual oligopoly – the focus of competition moves to the concentrated competition between them. When their sales/marketing strategies are equally effective, the side with the largest sales force will win.

Second Lanchester Law – the Law of Effects of Concentration

In markets where no actor has a clear leadership, the one with the highest market share will have an advantage.

The law of market share expansion is the law of bullying the weak.

Analysis of market share and market targets is paramount to the game of business. Market share provides the capital resources with which to defend position or attempt to expand it.

In any given industry, profitability increases in a linear relation to growth in market share.

Round 3 – APPLICATION OF THE METHOD TO THE PROBLEM

General trend since 2015 – increase in areas under cultivation in ALL regions (with one mild exception). 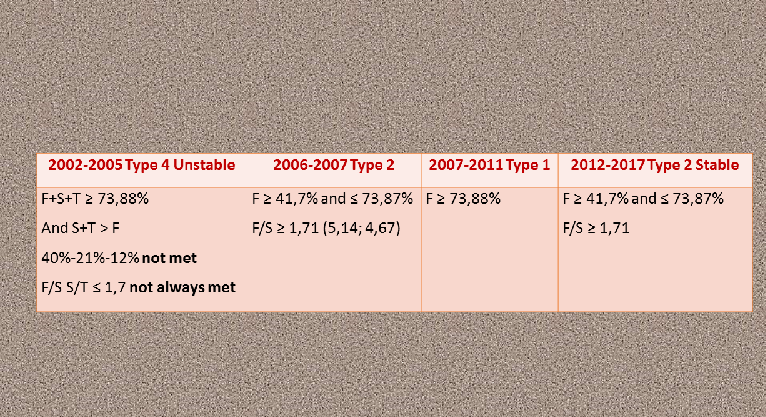 General trend in 2017 – cultivation increasing in ALL provinces. 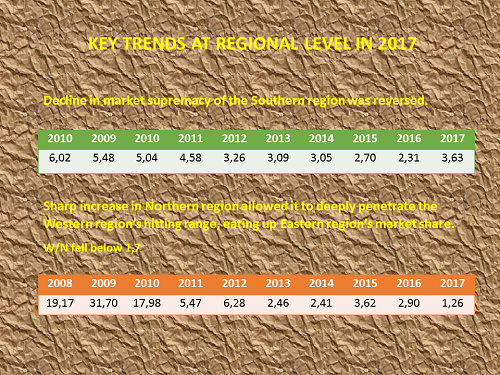 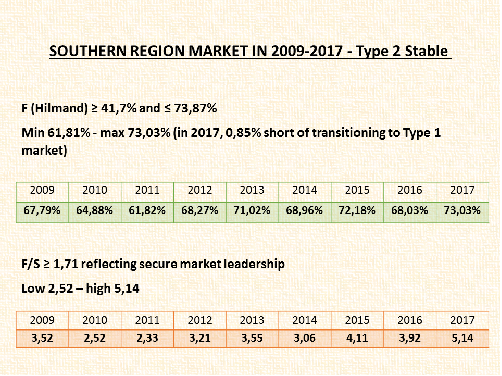 General trend in 2017 – cultivation increasing in ALL districts, all-time highs recorded in all districts. 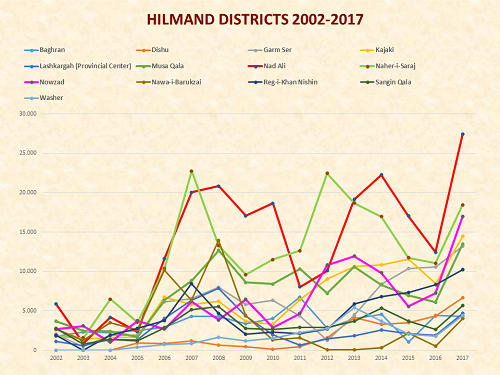 2006-2017 Type 5
At the level of individual actors the market is highly unstable. However, at the aggregated level of F+S+T it becomes a Type 2 market, allowing for collective market control, albeit at the lower threshold, i.e. vulnerable to shifts in market share distribution. 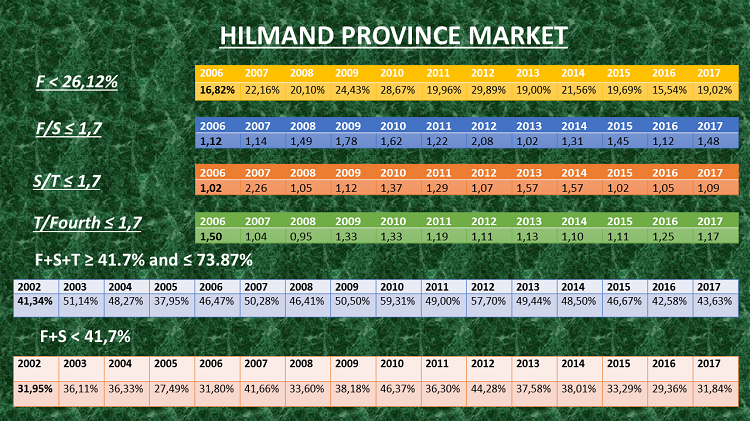 A key feature of the Hilmand province market is highlighted by the amazing performance of only two districts – Nad Ali and Naher-i-Saraj. Between them they hold the largest and the second-largest share of the market for more than a decade. 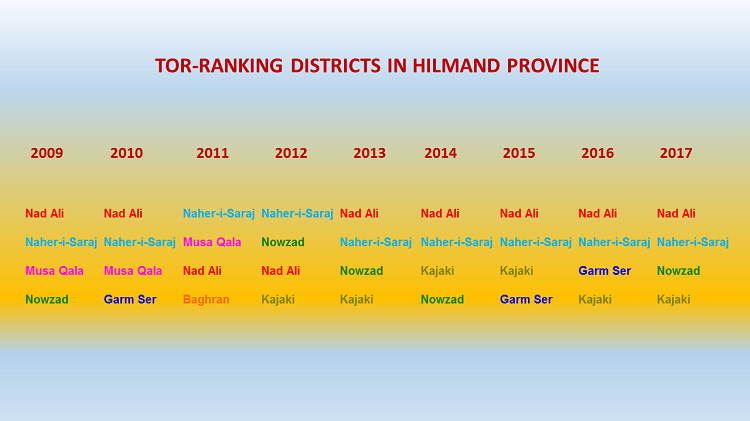 This circumstance means in turn that in recent history (since 2013), the kingmaker role that allows the F+S+T group to control the market belongs to third-ranking districts – in particular, Nowzad, Kajaki and Garm Ser.

There is a clearly observable prevalence of the stable Type 2 market – Premium Market, particularly in Southern region at regional level and in Hilmand province for the group of F+S+T districts.

This market type implies presence of one very strong actor that imposes stability. In a rare case when this actor loses its supremacy, the market can be expected to quickly degenerate all the way to Type 4, at least temporarily. Longer-term outcomes of this turbulence are unpredictable. 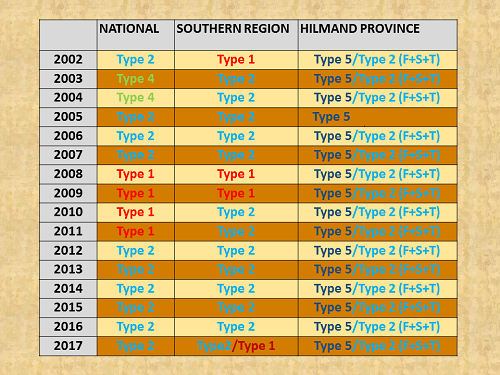 Because Type 2 market is so popular in Afghanistan, it is a good idea to have a closer look at its sub-types. There, a key difference between the market in Southern region and that in Hilmand province becomes obvious.

In Hilmand province, at the same time and regardless of the above trend, the market remains a rather volatile Type 2 lower-range at the level of F+S+T group and a highly unstable Type 5 at the level of individual districts. 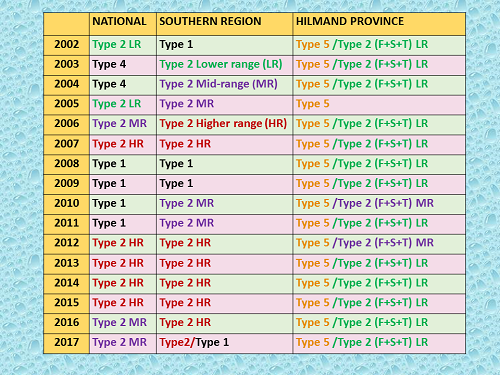 It is nothing short of amazing that under such turbulent conditions two districts – Nad Ali and Naher-i-Saraj – have for over a decade managed to maintain first and second places. In my view, they are certainly worth a closer look.

At the national level, the current trend indicates a shift from Type 1 market to stable (mid-range) Type 2.

In Southern region, precisely the opposite trend is being observed within the same time period (since 2012).

At the district level in Hilmand, Nad Ali + Naher-i-Saraj + Alternating Third-ranking districts have as a group control of the market, albeit at its lower threshold.

The present analysis looked at the market for areas under opium poppy cultivation.

Arguably, it could me more useful for practical purposes to focus instead on the market for opium.

I am not inclined to attempt extracting some deeper meaning from this data.

For my purposes it suffices to observe that in the case of Southern region, which represents the crux of the problem, in 2017 there is no observable contradiction between the share of opium poppy cultivation and that of opium production.

It means at least on this level there is nothing wrong with using area under cultivation as a proxy for opium production.